by the Slaughter Associates Investment Committee

Recently, there has been a renewed interest in the inversion of the yield curve. The term, which was mostly unknown to the average investor, has been given life by repeated reports from multiple media outlets. The phenomenon’s recurrence has caused the investment community to become nervous about future economic prospects resulting in increased market volatility.

To better understand the recent activity, let’s define the ‘yield curve’ and provide context to an inverted curve.

The yield curve at issue is a plot of interest rates for U.S. Treasury bonds at a point in time. Usually from as short a period as 3-months out to 30-years. Normally, bonds with a shorter-term maturity will pay you a lower interest rate. That’s because your money isn’t tied up for an extended period, and your risk of default is lower.

Typically, the longer the term of the bond, the higher the interest rate. So, a five-year Treasury bond will pay you more than a 3-month Treasury bill. 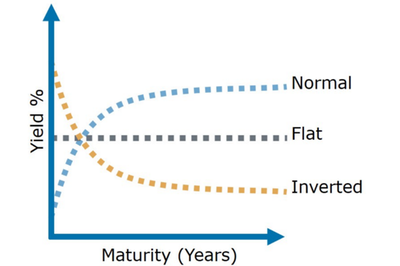 The nervous chatter of yield inversion begins when the yield curve flattens. This is when interest rates on short term bonds start approaching the rates of longer-term bonds. When short term rates exceed longer-term rates, then we experience the dreaded “inverted” yield curve. Such inversions usually happen when the Federal Reserve starts raising short term interest rates, and the longer-term bonds don’t follow suit with correspondingly higher rates. They remain in the same range they were before or may even decline.

There are several reasons why long-term bond rates can be under pressure. First, investors flee to safer investments when there is uncertainty in the market or the economy. Most recently, investors have become concerned about actual and threatened tariffs and a resulting global economic slowdown, among other factors. In response, buyers are turning towards bonds in larger numbers, which pushes the yield down.

Adding further downward pressure on the yield curve is the fact that several other countries are also cutting interest rates to levels lower than U.S bond rates. For instance, a ten-year German government bond continues to have a negative yield, meaning investors are willing to lose money over ten years to have the safety of a government bond. These investors may see U.S. Treasury bonds as a more attractive option since they provide positive returns increasing the demand of U.S. bonds and pushing yields down even further. For added perspective, there are currently more than $15 trillion in bonds around the world paying negative interest. So, a positive return rate in U.S. government bonds looks quite attractive.

The reason why investors are so concerned about an inverted yield curve is that this pattern in the past preceded 9 out of the last 12 recessions. Thus, people are now inclined to believe that lower long-term rates mean that the near-term economy may have slow or negative growth. However, there have been times when a recession did not follow an inverted yield curve.

When you look at our current economy and projections over the next year or two, a recession does not appear to be highly likely. GDP growth looks to be tepid, but not go negative any time soon. Most economists predict that we will slow to 1-2% GDP growth but will avoid a recession, unless we experience a shock to our economy, such as a conflict with Iran that suddenly spikes oil prices.

Regardless of whether we experience a slowdown or a mild recession over the next couple of years, we have positioned our clients’ portfolios to withstand increased volatility. Our bias is towards more conservative stocks with solid fundamentals, as well as higher-quality and diversified fixed income instruments. In the meantime, we’re looking for securities that may have been swept up in market volatility and are showing good valuations for the expected return. We are ready to take advantage of such opportunities as they present themselves.