In an unpredictable economic environment, how does the Federal Reserve balance quantitative easing, low-interest rates, and inflation?

With the recent news of advancements on multiple fronts in the development of treatments and vaccines to combat COVID-19, anxiety regarding the uncertainty of our economic future has quelled significantly. As a reflection, today’s widely unexpected May employment report showed growth in jobs of 2.5 million and an unemployment rate reduced to 13.3%. Most analysts were expecting an additional 5 million jobs lost with the unemployment rate inflating to around 19%. Accordingly, the US stock market (as of mid-day today) showed a gain of more than 3%. 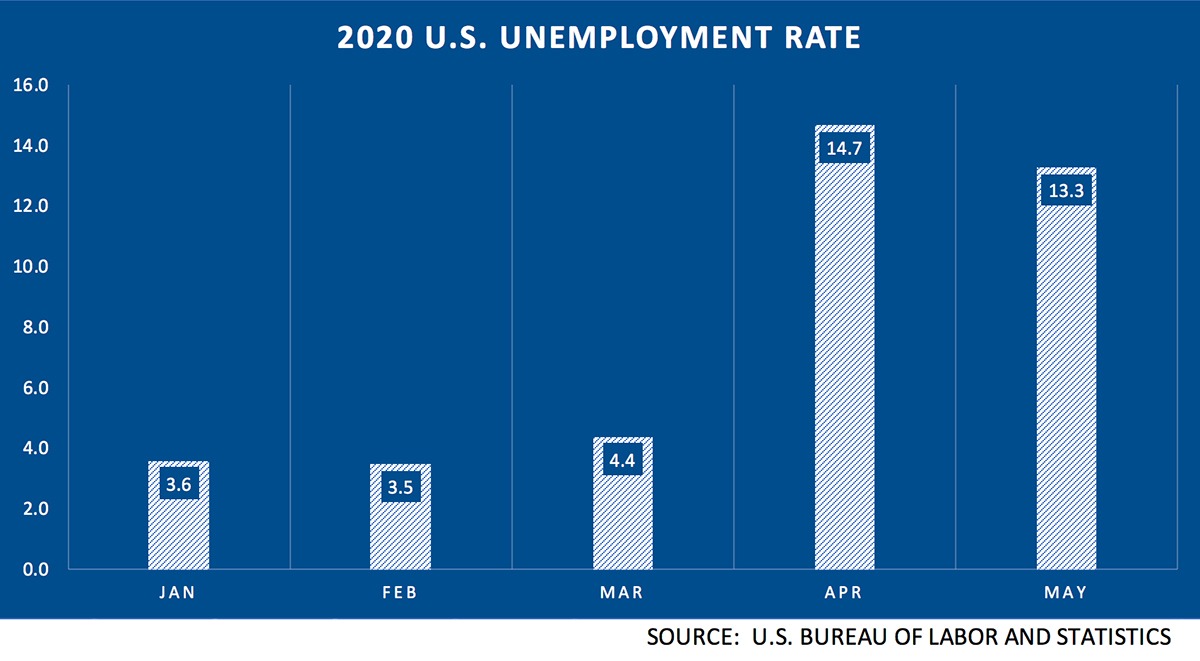 As you might expect, the Slaughter Associates Investment Committee huddled after the release of the jobs report, as we have routinely the past several weeks, to discuss top concerns and opportunities. One development that is now rising to the top of our watch-list is inflation and its potential impact on our investment and wealth management strategies.

During times of abnormally high volatility, like what we are experiencing now, the Central Banks of the world (including our own Federal Reserve) have pulled on various economic levers to help stabilize economies. However, deploying measures such as lowering interest rates or applying quantitative easing must be done judiciously to avoid inflationary spikes.

Quantitative Easing is the less familiar tool at the Fed’s disposal. Put simply, it involves printing money to buy bonds. Central Banks become buyers in the bond markets at times when corporations, banks, and insurance companies are in desperate need to raise cash by selling their bond holdings. In these situations, typical buyers with cash become unwilling purchasers due to market uncertainty. Thus, the Central Banks step in to keep markets functioning. These actions can also prevent interest rates from skyrocketing.

The net result is trillions of dollars (or yen, or euros, etc.) in global circulation and bonds making their way to Central Bank vaults. The chart here illustrates the recent elevation in bond purchases by developed market central banks (U.S. Federal Reserve, Bank of Japan, European Central Bank, and Bank of England). 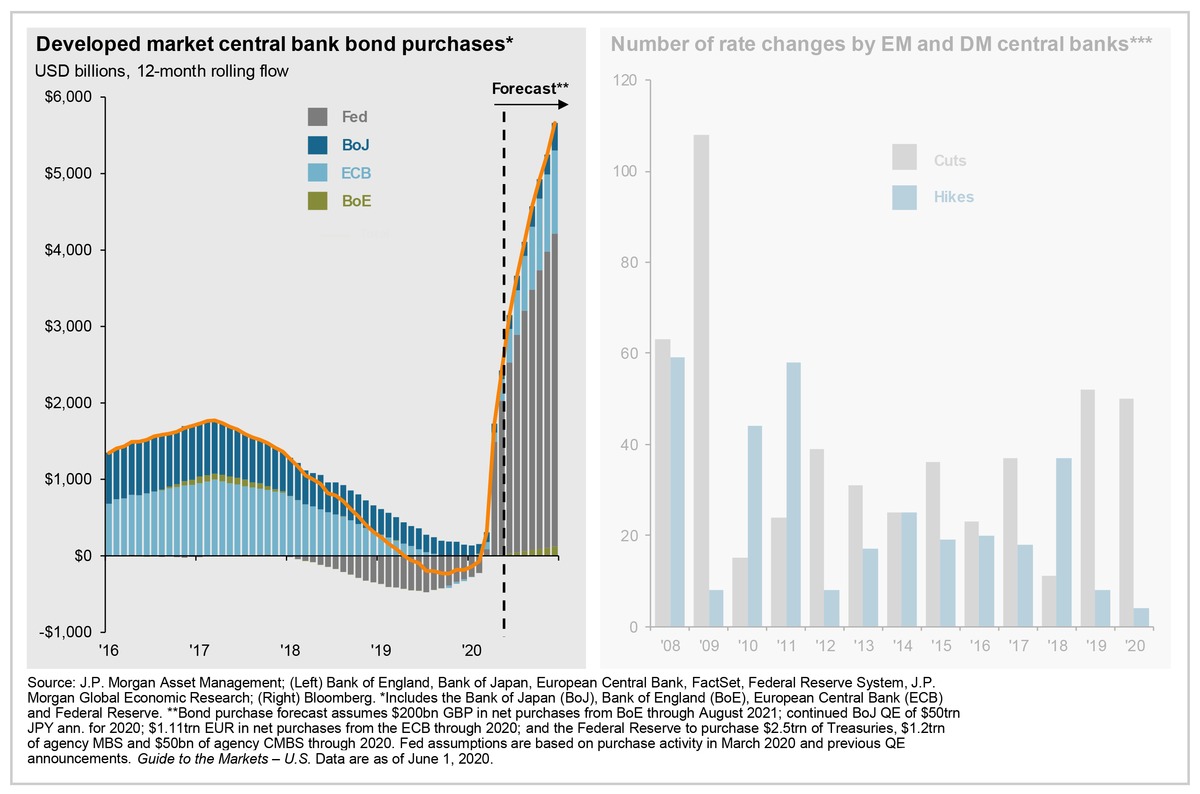 It sounds like a good plan, so why don’t the Central Banks implement this strategy all the time?

That question can be answered with simple supply-and-demand economics. If you increase supply, without a corresponding increase in demand, then the price goes down. The same is true of currencies. The amount of dollars in circulation matters to the value of your currency along with your country’s trade balance and interest rate differences with other countries. Printing too much of your currency results in a decreased value, something that happened with many South American countries and Germany following World War I.

Currently, there is a slight weakening of the dollar (as illustrated in this chart labeled “The U.S. dollar”), but nothing significant as of this writing. 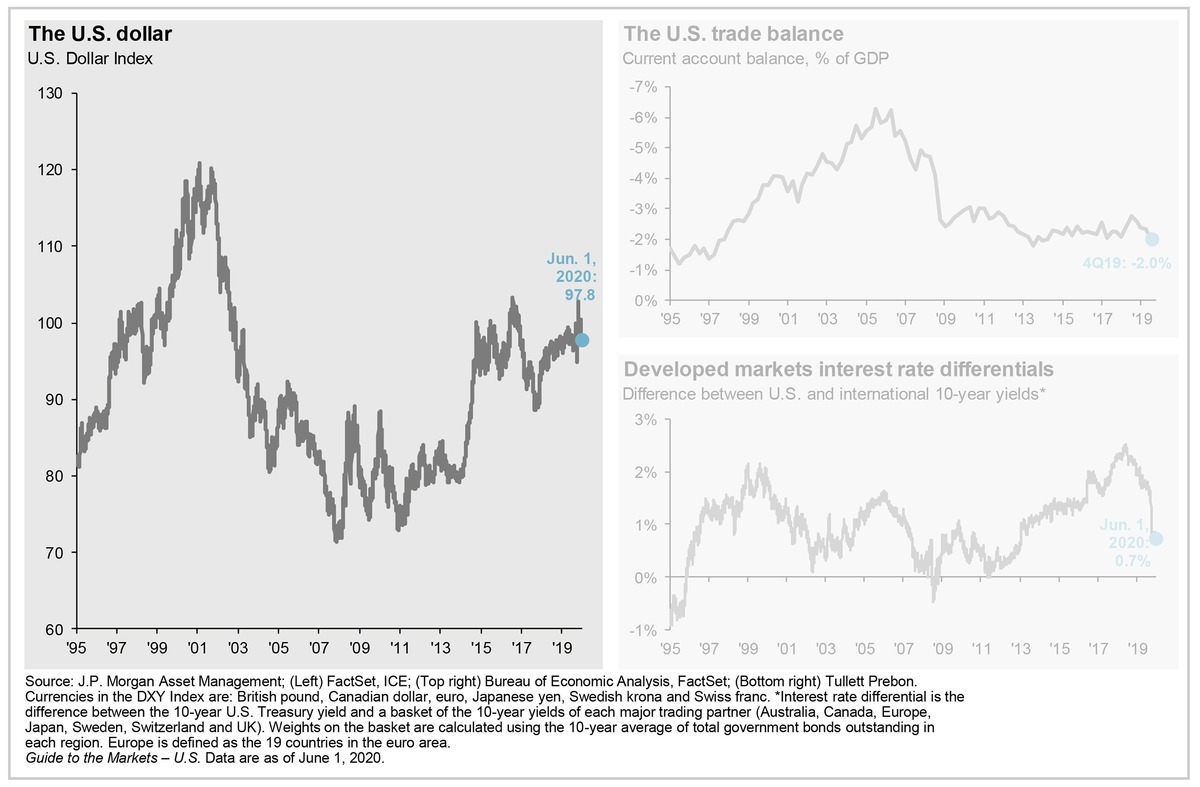 Today, the U.S. dollar is holding relatively steady because other countries are taking similar actions to protect their economies. The thing to watch is if on a relative basis the U.S. increases its money supply more than others. This would lead to inflation within the U.S.

In very simple terms, inflation is, “too many dollars chasing too few goods.” This chart (labeled “CPI and core CPI”) provides a view of what U.S. inflation has looked like for the last few decades. 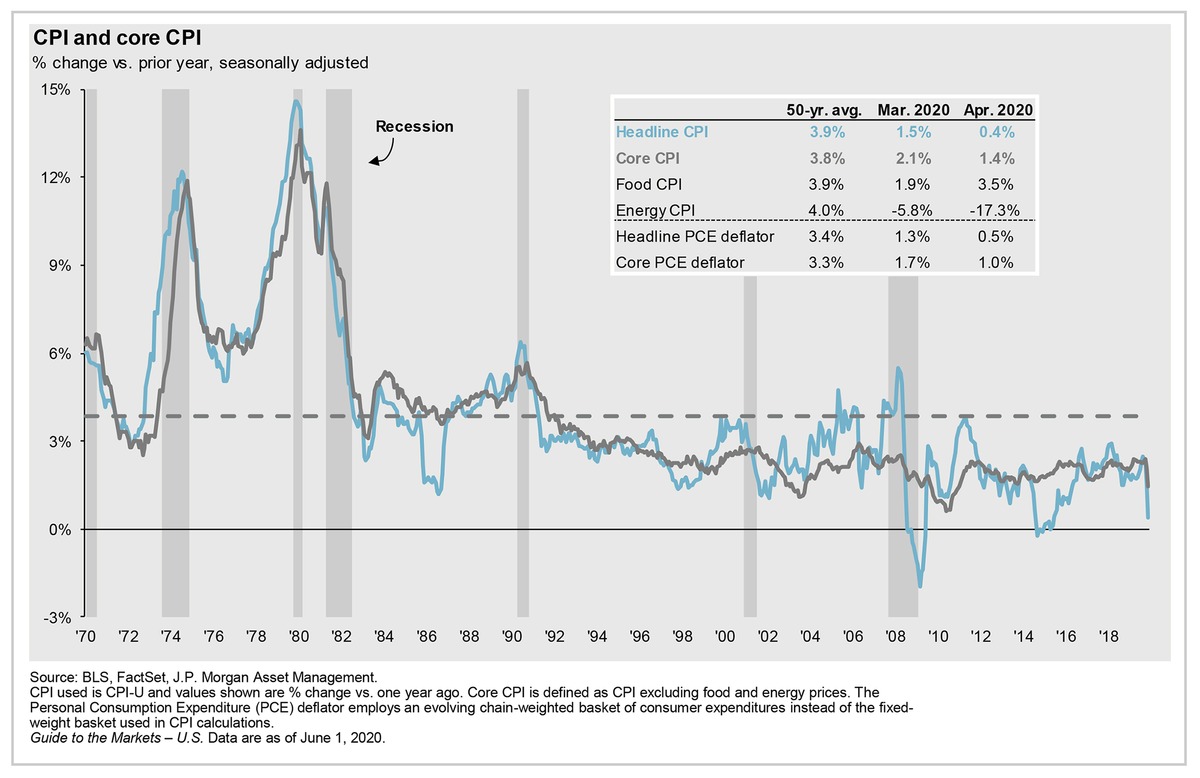 Since the mid-1990s, inflation has been relatively contained and is near multi-decade lows. Right now, oil prices and the considerable spike in unemployment has kept inflation under control, but if the economy recovers and the world banks do not withdraw the cash supply (which is a more difficult task than creating the cash at the start) then more volatility will result and a playbook for investing in an inflationary environment will be needed.

What we will be watching closely are those indicators of inflation as well as appropriate adjustments to investment strategy. As time moves on and the longer-term landscape becomes more clear, we will continue to keep you informed about these strategy adjustments and how it may impact your wealth.

Back to the COVID-19 Resources page.